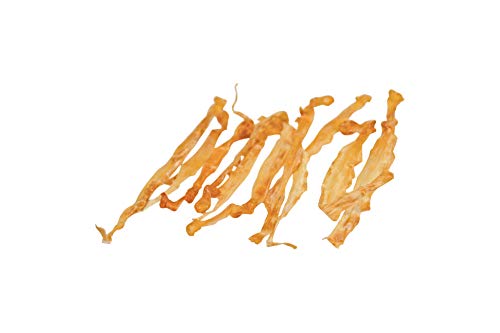 The dog I sit for absolutely loves these things. They don’t have added flavors, coatings that come off or odors. I can’t smell anything, but he can sure tell when I have one with me. It’s very important to me that they are both sourced and processed in the USA, due to contaminated china made products. I don’t know who thought it would be a good idea to dry turkey tendons and sell them, but I know one dog who is very grateful.

My dog loves these. They last a couple of minutes per stick since they are thin, so they're not like the other not bully sticks that last a while. But, I keep getting them because my little dog loves them.

Our 15 # terrier-poodle mix loves these tendons. They are very safe for her to chew and easily digested. After our afternoon walk, all I have to say is, "Do you want a chew stick?!" She starts bouncing up and down.I highly recommend them as a safe alternative to raw hide chews.

Absolutely delish according to my beloved friend. Two seconds it's gone and he looks puzzled about where it went. Money well spent and he is soo happy when he receives a strip.

My 4 pound dog loves it. Have to watch her though as she tries to eat it too quickly. A couple of times have had to pull away from her as it was not in her best interest to keep chewing on it. She was trying to swallow to large of a piece.

I order these on a consistent bases! GREAT Shipper, GREAT Product! No matter what I bring home for him NOTHING tops this treat! Thanks!!

Dogs love them. Not hard and crunchy where it would be tough on old teeth and enough chew to keep he dogs interested.

My dog has digestive issues, but loves to chew on tendons. These are the perfect size for small dogs. My schnauzer loves them and I am confident that they will not disturb her system. Tendons this size are hard to find, and I am so happy I found them for my best friend!

She likes chewy things but usually gobbles them quickly. She has to gnaw on these which she does, quite happily. Takes a while.

My Dog has several food allergies and turkey seems to be the only one she can tolerate. It’s heartbreaking to not be able to give ur dog treat because often many treats include added ingredients. These turkey treats are great for her. They are natural and only have the one ingredient, turkey. It also feels good to give her a product that is healthy and natural. Thank you! will order again for sure.

My dog loves these tendons and I like using them as a mid-day snack. Bizzy can take about 10 minutes to eat one of them and she seems to be satisfied enough to stop begging. If your dog is a super chewer and tends to swallow large pieces of whatever they’re chewing, I don’t recommend this product. However, if your dog is small and chews material relatively well, then this is a great reward or snack.

3oz GoGo Turkey Tendon Strips were well liked by my 2 dogs. Unfortunately, I will have to restrict them to my small(er) dog due to cost. They are a little pricey for the amount you get. They would also be improved by having a resealable bag. They don't live up to the picture for amount. They aren't useable for my fox terrier,as he inhales them, but my small, elderly poodle loves to chew on them and they are appropriate for her ability to chew

My dog literally cannot get enough!! I usually put down 2 or 3 other treats at a time just to get an idea of what she really likes and these are almost always her top choice next to beef jerky. It takes her no less then 3 minutes to eat one and the length of each is about 2/3rds of a ruler. These treats are a moderate chew, not soft but not very hard either. Overall a great product.

My dog absolutely loves these....she begs for one every night before bed as a bed time snack. She is 6lbs and usually eats one in about 30 mins. The company also sent me free poop bags with the order, which was a nice complimentary surprise.

My two mini-doxies LOVE these! I can get about 2-3 minutes of chew time out of each one, with them pulling and tearing and grinding on them. They really love them. Each bag contains about 12-14 tendons it seems. I sometimes give them 2 at a time, so the bag doesn't last as long as other treats might. They are an all natural treat and made in the USA. Wish they weren't as expensive, but compared to similar products, their price point is right on. They were shipped immediately after ordering and I got them right away. Bag is easy to use and re-seal. Really great product.

My 9 months old poodle is very sensitive to new foods and some treat. He would puke or have diarrhea easily. I never had this problems with my love of 15 years who passed away one year ago. (white poodle who could eat sushi). My new son cannot have some treats including any of dental cares (greenie and others) . But this treats last relatively long (not 15 seconds) and he can enjoy and most importantly he doesn't get sick. Even when he was very small as 3 months old when he came to us, he was fine. BEST BEST BEST safe and yummy treats.

My 26 lb pug/sheltie mix hates most bones but he loves these! Ridiculously priced at $3.00 each in local pet stores, I can't tell you how happy I was to grab an entire BAG of them for less than $25. Quality is just as good (if not better - they're bagged and not exposed to open air) as tendons found in my pet store. Just a heads up - these are not as low calorie as some might suggest - my vet says they're approximately 15-20 calories each. Not terrible, but my dog only gets a few of them per week.

Love this treat, my dog does too! It is wonderful that I can cut the tendon strips to a shorter length and stuff it into a Kong that keeps my dog occupied between 30 minutes to hours. It depends how I stuff the tendon strips into the Kong and with other items. I don't give my dog the tendon strips directly, because she just gobbles it down within a minute. I have to challenge her by making it tough to chew within a Kong. Recommended.

I would have given these a 5+ star review in the past, but the last few times I have ordered these they have not been up to my usual expectations. They have always been mostly unscented, still are. When I first started getting these a few years ago, most of them were nice and flat and thin, very easy for my yorkie to chew. There might have been a couple not quite as nice, or there were a few gnarly ends he could not chew, but they were few and far between. Now almost every single one of these is skinny, thicker, and has multiple gnarly areas I cannot feed to him. Plus, because they are so much thicker, I now have to cut these up in small pieces, I am talking about ¼” pieces, in order for him to be able to eat them. And I have to throw out all the gnarly pieces, what a waste! I admit this might not matter if you have a larger dog with bigger teeth to chew through them. I happen to have a small dog with small teeth and some dental issues. I took some pictures. The first shows a random sample very representative of the rest. The one strip at the bottom is closest to the larger width they used to be, but is still thicker and gnarly. The 2nd is a close-up. The third shows one cut into pieces, with the only scissors I have found strong enough to actually cut them. It also shows a gnarly end he cannot eat. He still loves them, but I miss being able to give him a nice flat piece he could chew on his own. What happened?

I see that I'm the second person to have gotten a moldy pack. If it weren't for that, I'd give it 5 stars as my dog loves these things. But, because of that, I'm only giving it 4 stars. Of course, after the refund, I'm ordering more... ;)